LIL IS BACK! Return to Itch, Patreon Takedown, Early Game Rework, and more! 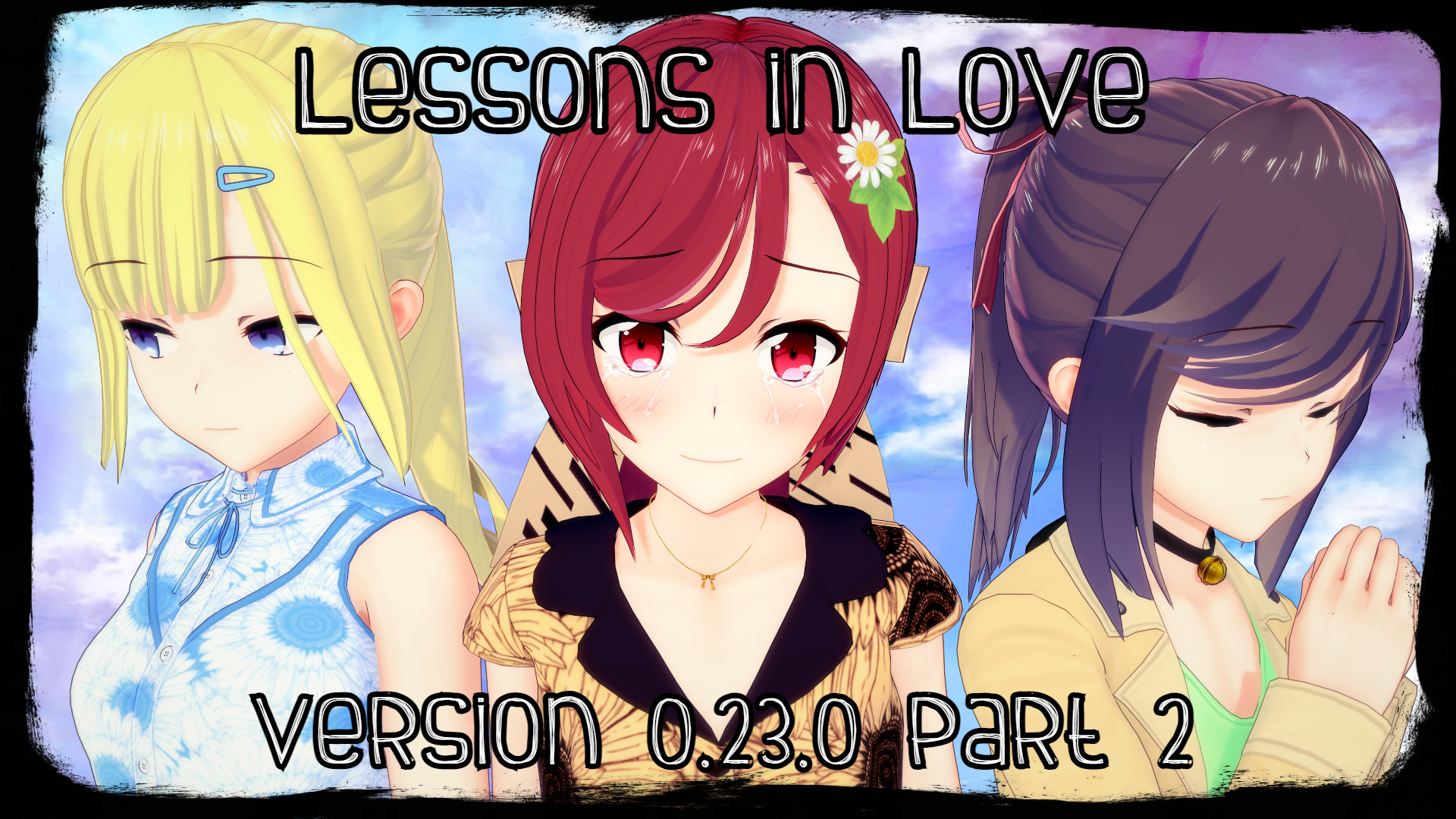 If you've been following Lessons in Love for a while, you'll probably have noticed that the start of 2022 has been a fucking asshole to me.

If you're not one of those people, however, allow me to save you some time by bullet-point recapping the year thus far!

- Patreon  demands I make a SFW version of the game so it can remain on the site
- Development is sidetracked by roughly 45 days while I do that
- Game gets restored on Patreon! Hooray!
- Death is a terrifying thing
- Itch locks LiL due to a DMCA claim for the mention of another publisher's title in my game page.
- Immediate fix, but Itch support goes MIA and the game remains on indefinite lock.
- "Hi. It's Patreon again. We changed our minds and don't want you here anymore. Lol."
- 80% of my income is randomly deleted with zero notice three days before I was supposed to get paid.
- (Still don't know what went wrong, but fuck them I guess)
- Business license is suspended for not filing a "No Tax Due" report (Fixed)
- Itch republishes the game

Which brings us to today! The relaunch of Lessons in Love on itch.io, happening in the midst of what will be a huge improvement to the entire first chapter of the game.

0.23.0 Part 2 is the last "real" update until June/July while I rework over 150 events from Chapter 1 to bring the early game's quality up to that of the later game. When I first started making Lessons in Love, I wasn't really sure what direction I wanted to take it in, which resulted in some glaring issues in terms of pacing with some early character arcs. So, in order to make the game more in line with my vision for it, I am fixing all of that.

Your saves will still work and you won't have to replay the game, but I highly urge you to do so after the rework is completed since there will be hours and hours of new content.

BUT SELEBUS, HOW CAN I HELP?

Thank you for asking, mysterious player!

With Patreon being taken down, I now need to focus on restoring my income so I can maintain the same level of quality you've all gotten used to over the last few years. Thankfully, I have an amazing player base who was able to band together and restore almost 70% of it! Unfortunately, however, a lot of those people are one-time mega donors administering a giant shot of morphine into a undebatable staggered revenue stream. In summation, we are not out of the weeds yet and please consider supporting my work if you like what I do!

SubscribeStar even currently has an exclusive preview of LiL's newest heroine as well as a contest/raffle for things like LiL T-shirts or annual game passes!

All throughout the next two-three months, I'll be posting exclusive previews of the early game rework and distributing test builds to all subscribers!

And thank you so much for playing.

Will there be an android version?

Most likely not, as the game has become too large. You'll have to use JoiPlay or a similar program if you wish to play the game on android. There are instructions on how to do this on the FAQ on the wiki.

June / July!
I don't know if I can wait that long. I've only just in the last few week found this. I'm only day 90 or so but i've LOVED the writing so far. If you're saying this isn't up to your standards I can't wait to see what awaits me but i'm stuck in a hard place right now.

Part of me desperately wants to keep playing. Another part of wants to see what you have cooked up. Especially with all the new content you mentioned.


In terms of Patreon, i've always hated that site...
It's a repeating theme. They ask creators to change who they are, what their content is. The creators, sadly, oblige. In this case we lost 45 days of development. Then, Patreon pulls the plug anyway. I sincerely hope now that that site is behind us, you won't censor yourself going forward. Keep your vision true to yourself.

Im glad its back. I just discovered this game and then next thing I know its gone? Lets just pretend that never happened

So let me I see if I get this straight: if I download the game here on itch, I'll get the actual game and not that weird-ass version Patreon forced you to build and then fucked you over all the same, right? I'm asking this because I decided to test the capabilities of my not-as-piece-of-shit-as-my-phone laptop, and believe me when I say that I was stunned when it ran Harem Hotel with 0 issues, so I can finally come back to some other games including LiL.

"Itch and Patreon are being assholes to NSFW-dev."

How many people have experienced this? Devs and everyone else, I mean.

Patreon cutting funding over not liking something about the game the devs make? I've read it roughly 6 or 7 times from non-incest devs and from literally all that had incest (who nearly all were able to regain it by using the "landlord and roommate" or "childhood friend" replacements, so this one is weirdly harsh)

Itch causing trouble? only 4 or 5 times, always with support being very slow. I'm pretty sure itch is like YouTube prioritizing "the big ones" in their reaction speed which usually means horror goes quicker than nsfw

That being said there aren't that many i follow enough to know if they had that trouble as well. Especially with Furry-nsfw (which is definitely a noteworthy amount) I'm completely out of the loop

I actually follow very few projects as well, just like you. Didn't hear anything from pretty much any of them, like Killer7 with My New Family since he removed all incest from his game a long time ago. Previously he coded a cheat code to activate incest (change roomate to brother/sister and so on), but nowdays people just use an unofficial patch with no ties to Killer himself. Itch probably went full crackdown on LiL because it is not only is a psychological horror game but it's also a big name on it's own, so fuckers decided to use it as an example (but won't actually do it to any other horror game with much worse content, regardless of porn and all).

Honestly, the way things have been going for much bigger games, this weird crackdown was to be expected. Not because it is right, but because it makes the sites look politically correct, not that they actually are most of the time.

Honestly, I would love to replay the game again since I fucked up Rin's story so if I can do that while having new content, it'll be great. I do have a question though. Is the content already available, or will it be administered through small updates over time? Or will it come with one big update. I'm really excited for chapter 3 and am scared as hell for what's about to happen to my favorite character in the game.

It will be a series of small updates!

Wow you got mega fucked, i hope you can recoup all that was lost cause this game is some top tier work.

SubscribeStar is probably a better bet for you than Patreon, their TOS are really restrictive. Good luck going forward.